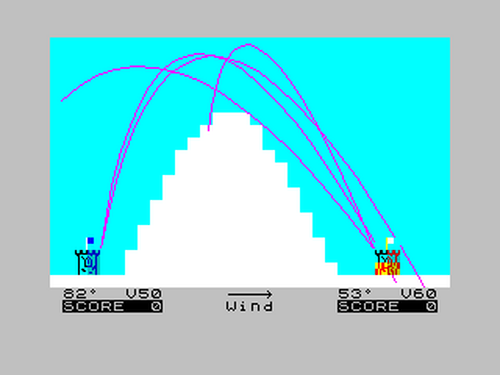 Here is the game I set out to remake - Artillery on the Macintosh by Kirk Crawford: 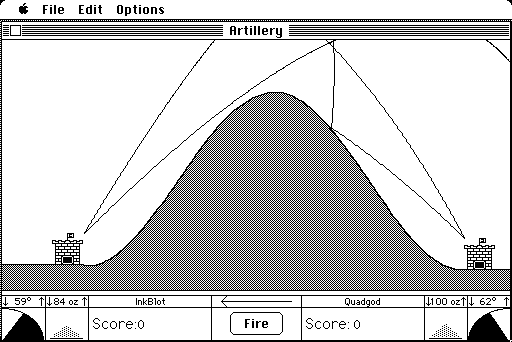 My version works within the limitations of Sinclair BASIC in the following ways:

I did investigate compiling some or all of the BASIC to machine code via HiSoft BASIC or Boriel's ZX Basic to improve performance, but there were some obstacles - mainly because I considered it was important for the players to be able to input null values to retain the angle or velocity value from the previous turn. This is because in practice a player will tend to only adjust one variable rather than both per turn, so this design decision significantly reduces the amount of typing needed and improves the flow of the game. A string INPUT can be null, but not a number INPUT, hence I have to use the VAL function to convert the string to a number which neither of those BASIC compilers supports. However, by removing that feature and compiling with HiSoft BASIC, I found that although the trajectory plot was faster it didn't actually improve the game. It did introduce some functional problems though, probably due to variable types autodetecting incorrectly. The relatively slow trajectory plot arguably introduces a degree of suspense to the game increasing the enjoyment of a two player match, so I think the game is just fine remaining as a pure BASIC program.

The experience of writing this game has brought an even greater appreciation of quite how special a product the ZX Spectrum was. The BASIC language remains versatile, not quite the horrific retrograde step I was expecting, and the reference manual that was bundled with every Spectrum is absolutely exemplary. It's clear enough that a child can understand it (I did, back in the day), it introduced escalating complexity with perfect pacing, and it's amazingly concise. They don't make 'em like they used to...